For the past 18 months, I have been monitoring my “stress” levels through the App on my phone: Samsung Health. It reads your pulse, oxygenation in the blood and computes your level of stress. All of last year, my results were always “in the yellow” – headed towards “high”.

I made it a point to measure my levels at different times of day and before eating, after eating, sitting down, standing up, before meditation, after meditation. Always… stressed.

I was doing a relatively good job, in March, April and May 2017 of meditating daily. Taking 10-20 minutes each day for mindful breathing and just letting the thoughts flow and flicking them aside.

I tried various types of meditation, including a week of Ho’oponopono and another week of “mindful eating”.

I can’t say I found any major differences throughout those months (although I will accept that the May results are somewhat lower than the results in February).  But they say that the benefits of a daily mindfulness or meditation practice are never immediately visible. You see them long-term, not in the short term.  June and July’s results seem to creep back up again, and I can notice that I was not been consistent with my meditation in those months, as I was no longer taking a meditation class and was “struggling” to find my “groove”. 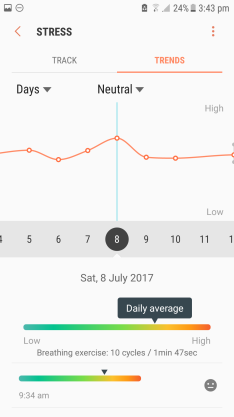 July was all over the place, but always “stressed”.  It didn’t seem like getting back into a meditation practice was helping a whole lot. But I persisted, accepting that I hadn’t been consistent since finishing my Meditation classes in early May.  As I reached August, and took a week off, I can see the shift down slightly, easing into a light yellowish green.  Still not green and serene!

And then I kind of ignored the measuring for a few months. There are sporadic measurements taken from September through to January 2018, but nothing to give me an idea of how I was really doing those months. I went back to measuring in February 2018.

That was about the same time that I was getting serious about taking care of my health.  I have been meditating regularly through Christmas & New Years, and making time for myself. And I consciously sat down in November/December to look at the 2018 schedule and give myself a weekend off every 6-7 weeks.  By this I mean, a really weekend away every 6-7 weeks. Where I would not be responsible for anything at all at Church, or have any social responsibilities. A weekend to go camping, or to the beach, or to a friend’s house. But time to get away from everything and spend time just with Isabella.

Part of my decision for time off, was also a decision to do some emotional work “releasing”.  On World Day of Prayer, Friday March 2nd, I spent the morning working on forgiveness. The first hour I spent on Ho’oponopono, and then the next 3 hours I spent on active journalling and forgiveness work of things I wanted to release and stop carrying around with me.

What’s the point of studying to become a Ho’oponopono practitioner if I am not truly practicing? Most of the work that day centered on forgiving myself! Letting go.  Choosing how I wanted to build my life “from now on”, rather than how life was happening to me.

Another major change, but that happened a little earlier (the end of January) was a health choice that I made: to start seriously looking at what “feels right” for my body. And this means that I am consciously taking Psyllium & Diatomaceous Earth daily. I’m sleeping much better, because my gut is feeling much better!

I couldn’t tell you, specifically, what makes for such a major change: healing my gut or meditating & mindfulness. What I do know is that getting back to “health” is a conscious choice. It’s something that I choose each day: to look after myself. To be mindful of what I am choosing (or even when I am failing to choose, simply by acting automatically, rather than thoughtfully).  And that all comes from a place of mindfulness!